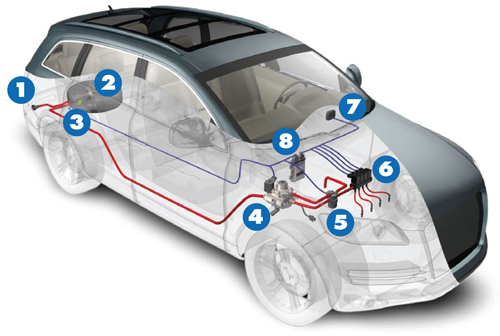 Designed for later model vehicles, Easy Fast integrates with the engine management system – and injects the LPG into the engine in the same way as  petrol. This provides uncompromised performance, and outstanding fuel economy.

The only difference you’ll notice – is when paying less at the service station – and in knowing you are helping the environment.

LOVATO EASY FAST LPG represents the latest technological
evolution for LPG conversion systems. This system of phased sequential
injection of LPG, in which the gas is injected in each cylinder by an
injector synchronised with the phase of the cylinder to mirror the way
the car works on petrol, has been designed for motors of 3 to 8
cylinders, including turbo and valvetronic. As a result the EASY FAST
system has been certified using the most recent standard EURO 4. All
the system components have been designed and tested at length in the
Lovato R&D centre in order to guarantee performance and reliability
at the highest levels.

The principle components of the system are:

1. Filling Valve:
The filler valves are made to australian standard AS1425 and can be fitted into the body work of the car or if space allows
inside the petrol filler cap.

2.Tank: Filled with liquid phase LPG at the filling station with a pressure of around
15 bar. The tank is in made of high
resistance electro-welded steel and
thermally treated in order to avoid
fractures in the event of an accident. Toroidal tanks are now commonly
used because they can be placed inside
the hole for the spare tyre, but cylindrical tanks are also used.

3. Tank Valves: Valves fitted to the tank allows gas to enter the
tank through the filling valve and automatically stops filling when the
tank is 80% full. There is a level indicator plus a manual service tap
with a solenoid valve which closes when not running on lpg or when the
engine is not running. A pressure relief valve stops excessive pressure
build up in the tank .
All the valves are enclosed in a sealed subcompartment to avoid any gas
leaking
into the car (not necessary when the tank is mounted out side the car).

4. Reducer: Vaporises the gas from the liquid phase thus reducing and then stabilising the
pressure to the optimum level for the injection rail. Fitted with an safety
electrovalve which closes the circuit
when the engine is switched off.

5. Gas Filter: Guarantees a flow of gas without impurities and oily
residue to the rail and thus the cylinders. In the Easy Fast system it
also has temperature, pressure and MAP sensors which optimises the
function of the system.

6. Gas Injection Common Rail: Controlled by the ECU the rail injects
the correct quantity of gas into each
cylinder via injector operated in phase with the motor.

7. Gas/Petrol Changeover Switch: Allows driver to switch between gas and petrol and shows the level
of gas held in the tank using a series of LEEs.
During normal operation the car starts on petrol and switches
automatically to LPG without the driver noticing. This changeover
happens when the water circuit reaches the requested temperature
(around 35°C). If ever the LP runs out, the system switches
automatically to petrol and alerts the driver with a bleep.

8. ECU (Electronic Control Unit): The gas ECU communicates with the petrol ECU and via signals received
from the systems sensors, controls the gas injector by calculating the quantity of
gas to inject and time of injection. The ECU is tuned during installation to the
specific characteristics of the engine and
is fitted with an auto learning programs which modify the parameters in function of how the car is driven or wear
in the engine.